Showing posts from August, 2011
Show all

- August 21, 2011
A few days ago, I stumbled on this excellent video, Visualizing US expansion through post offices via www.fastcodesign.com , which correlates data charting the expansion of the U.S. post office with overall expansion in the United States. The author, Derek Watkins, uses data from the U.S. Geologic Survey’s Board on Geographic Names and the Postal Services Postmaster Finder. Posted: Visualizing US expansion through post offices. from Derek Watkins on Vimeo . Co.Design editor Suzanne Labarre makes the cheeky observation that “post offices are probably the best signboards of civilization this side of cemeteries and whorehouses.” Watch it a few times (it’s a little hypnotic) and you’ll be able make observations about your favorite part of the U.S. I noticed how densely populated (using post offices as indicators) New York State was before most of the country was even on the map... a testament to its early settlement and its history as the original Western frontier. Copyright
Post a Comment
Read more

Several days ago, the New York Times reported on Baltimore's fiscally troubled Edgar Allan Poe House and Museum . For the second year in a row, the city of Baltimore has withheld funding from the small museum, which has long been a victim of geography as it is located in an economically depressed neighborhood far from the usual tourist destinations. Read the NYT article here . To support the Poe House through a donation, purchase of a block print of The Raven (Forevermore) by the artist Gaia or to sign a petition asking the mayor of Baltimore to restore funding to the museum, follow this link: http://www.poebicentennial.com/store.html Copyright 2011 Antiquarianation All Rights Reserved
Post a Comment
Read more

Tomorrow a copy of The Works of Edgar Allan Poe owned by Mexican painter Frida Kahlo is to be auctioned by Leslie Hindman Auctioneers. The dark themes portrayed in Kahlo's highly symbolic and often surreal paintings make her interest in the macabre works of Poe an important source of inspiration. The volume to be auctioned includes marginalia in Kahlo's hand and according the Hindman's description, "The inscriptions and collages in Kahlo's personal copy of The Works of Edgar Allan Poe form an extraordinary record of the artist's creative process in addition to revealing an important literary influence of her work. The item demands further study of Frida Kahlo's motivations, her selection of specific works, and the pointed references to her relationship with [her husband, Mexican artist] Diego Rivera."  It is estimated to sell for $20,000-30,000. Read the full description here:  Kahlo's Poe Copyright 2011 Antiquarianation All Rights Reserv
Post a Comment
Read more

When America Was a Lady 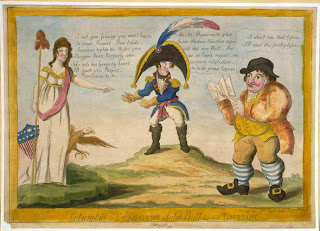 Most appropriately for a nation founded on philosophical aspirations, an early name for the United States came out of a witty flaunting of British authority. Columbia lends its name to everything from the U.S. Capitol – the District of Columbia – to the oldest college in New York and many counties and towns across the nation. Have you ever wondered why? Columbia teaching John Bull [Great Britain] his new lesson c. War of 1812 Library of Congress Prints and Photographs Division Washington, D.C. In the early 18th century, the publication of parliamentary debates was illegal throughout the British Empire. But the demand for such reports – especially in the colonies – was such that inventive journalists determined to find a way to publish the accounts of such debates. In order to skirt the law, the pioneering London periodical, The Gentleman’s Magazine , published the “fictional” Reports of the Debates of the Senate of Lilliput, drawing place names from Jonathan Sw
1 comment
Read more

Commemorating the 75th Anniversary of the Historic 1936 Berlin Olympics

A few weeks ago, NPR’s sports commentator Frank Deford delivered a characteristically fascinating report on the 1936 Berlin Olympics during which the ascendant Nazi state charmed the world, flexed its muscle and elevated Olympic pageantry to new heights. Listen to the podcast: Podcast: When Owens Beat Hitler Deford has written a novel on the subject entitled Bliss, Remembered: More info on Bliss, Remembered Copyright 2011 Antiquarianation All Rights Reserved
Post a Comment
Read more

Art, Manuscripts Destroyed in 9/11 Attacks According to New Report

- August 05, 2011
The World Trade Center Documentation Project has released a report detailing the works of art, historic photographs, manuscripts, and other irreplaceable objects that were lost or destroyed in the 2001 attacks, including works of Rodin and Calder, letters of Helen Keller and negatives of John F. Kennedy. Read more about it here: Mystery Surrounds Loss of Art on 9/11 Copyright 2011 Antiquarianation All Rights Reserved
Post a Comment
Read more
More posts