Last weekend, with fall in the air and a new set of wheels, my hubby and I looked around for a destination for a Sunday drive. We settled on Washington Rock State Park, located in Green Brook Township, New Jersey (GPS Coordinates: DMS 40° 36’ 47.65” N 74° 28' 23.70" W). What makes this park interesting is what makes so many New Jersey sites interesting... George Washington and New York City views! 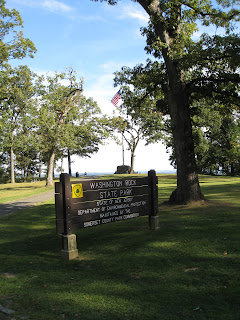 The park is an elevated outcrop of rock which gave General Washington a strategic view of the New Jersey plains below. 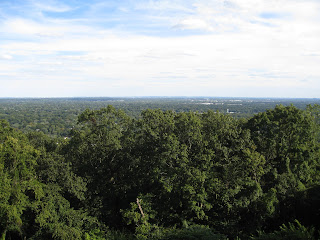 Looking south from Washington's Rock one can see for 30 miles 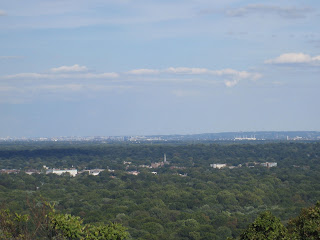 A view to the southeast

During 1777 and again in 1778-1779, Revolutionary forces ensconced themselves in the Middlebrook encampment in New Jersey's Watchung Mountains, which span Morris, Union, Essex and Passaic counties. From their mountain stronghold, the patriots were able to monitor movement of the red coats between British-held Manhattan and the city of Philadelphia. 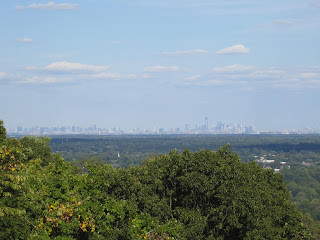 
In June 1777, Washington's British counterpart, General William Howe, attempted to draw American troops onto the open plain where they could engage in combat while Washington watched from above. It was Howe who had forced Washington to relinquish New York the previous year, driving the Revolutionary forces into New Jersey. Although Howe's main objective in the spring of 1777 was to take Philadelphia, he longed to engage Washington in combat on the plains of New Jersey. When Howe's initial attempt to draw out his adversary failed, he withdrew to Perth Amboy on June 22 to give the impression that his troops were boarding ships there. Washington sent his forward divisions, led by his trusted general Lord Stirling, to shadow the British troops and ordered the main contingent of his army to come down from the mountains. Seizing the advantage, Howe marched his troops toward Stirling's troops on June 26, culminating in the The Battle of Short Hills (which, despite the name, actually occurred in Scotch Plains). Meanwhile, British General Cornwallis attempted to cut off the American's retreat. Seeing Howe's maneuver from above, Washington sent down the order for his troops to return to their fortified position and thwarted the British tactics once again. Although outnumbered, Stirling's men managed to escape Howe's troops and regain their rocky stronghold. 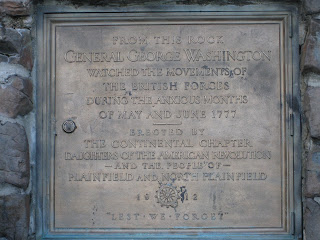 The site of Washington's lookout became a park in 1913, making it one of New Jersey's earliest state parks. Although the New Jersey plains are now grown up with trees and development, it is still possible to get a sense of the vista Washington enjoyed from this vantage point and to imagine his encampment in the rocky Watchung Mountains. 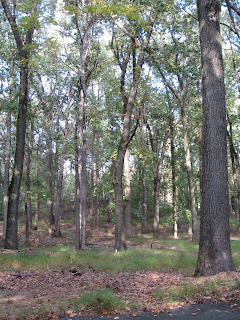