- September 04, 2011
At the Morgan Library & Museum June 3 through October 2, 2011
As a habitual list maker, list refiner and scrapbooker, I jumped at the chance to visit the exhibit
Lists: To-dos, Illustrated Inventories, Collected Thoughts, and Other Artists' Enumerations from the Smithsonian's Archives of American Art
on view at the Morgan Library & Museum through October. In fact, I found it so intriguing that I visited twice. The exhibit, ingeniously brought together from different collections in the Smithsonian’s Archives of American Art, was far more visually interesting than one might imagine. Some of the list makers include Grant Wood, H.L. Mencken, Alexander Calder, Joseph Cornell, Pablo Picasso, and N.C. Wyeth. Many, if not most, of the lists are illustrated and provide insight into the artists’ creative processes, motivations, organizational devices, social milieux and, in several cases, drinking habits. 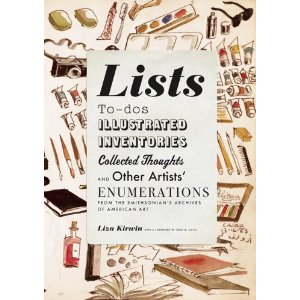 Exhibition catalogue
Some of my favorite items include:
The 1932 New York Sketchbook of the Mid-western-born artist James Penney, in which he records his plan to succeed as an artist in New York City:
“1. Spend what you have on materials
2. Don’t go back to Kansas”
Penney followed through, studying with George Grosz at the Art Students League, of which he became the vice-president, and creating numerous murals under the Federal Arts Project.
A lengthy H.L. Mencken letter answering some biographical questions, much of which is devoted to his peculiar attitudes about women and his defiant drinking habits:
“3. My favorite drinks, in order, are: beer in any form, Moselle, Burgundy, Chianti, gin and ginger-beer, and rye whiskey. I use Swedish punch only as a cocktail flavor. I dislike Scotch, and seldom drink it. It makes me vaguely uneasy. I also dislike Rhine wine, save the very best. I never have a head-ache from drink. It fetches me by giving me pains in the legs. When I get stewed I go to sleep, even in the presence of women and clergymen…
25. I drink exactly as much as I want, and one drink more…”
Mencken was so anti-Prohibition that he coined the term ombibulous, describing the support of alcohol and opposition to the restrictions placed upon it. This 1927 letter is a brilliant expression of Mencken’s attitude.
Illustrated diary pages by artist Janice Lowry, known for her “assemblages” made from found objects, and which form a three-dimensional collage in which her art blends with the mundane details of living. Doodles, drawings, clippings, photographs, and ephemera are punctuated by goals such as “Enjoy the process of letting go” and “establish fair prices” as well as long lists of “to dos,” records of her dreams, and one very long list of gripes.
A 1960 receipt from a Greenwich Village liquor store where Abstract Expressionist Franz Kline stocked up on everything from cognac and champagne to whiskey and wine for a New Year’s Eve party with his circle of friends, which included such other notable Abstract Expressionists as Mark Rothko and Willem de Koonig... this is a party I very much would have liked to have attended!
Copyright 2011 Antiquarianation All Rights Reserved
art manuscripts Museums