Some Jersey City Architecture and its Presidential Associations


Because of Jersey City’s proximity to New York City, the many historical and architectural treasures of this storied city are often overlooked. One such prize is the main branch of the Jersey City Public Library, which was designed by the architect who designed the Lincoln Memorial in Washington, DC. 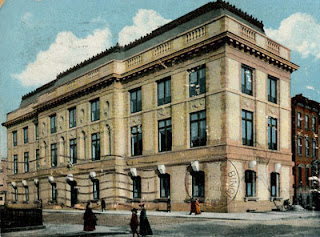 The cornerstone of the Beaux-Arts structure was laid in 1899 after the New York architectural firm of Brite and Bacon won the design competition. Henry Bacon (1866-1924) had honed his style at the prestigious firm McKim, Mead and White, working on such projects as the 1893 World’s Columbian Exposition in Chicago. After striking out on his own, the Jersey City Public Library was one of his first commissions.


Another of his early commissions was the Lincoln Memorial. Bacon was selected by the committee dedicated to erecting a monument for Lincoln (which had been long delayed by insufficient funding, differences over design and location, etc.). The long hours Bacon spent on the project beginning in 1897, eventually led to the dissolution of his partnership with James Brite. However, Bacon succeeded in bringing his Greek temple monument design into being and continued to flourish as an architect until his death.


Despite being very different structures, some similarities can be observed between the JCPL and the Lincoln Memorial, especially the raised and inset area above the ornamental frieze on each. On the Lincoln Memorial, this is referred to as the “Attic Wall” in Bacon’s description of the structure (The Architecture of the Lincoln Memorial by Henry Bacon). On the JCPL building, this area has the appearance of a very short second empire roof ornamented with copper decorations and set atop a faux-balustraded cornice. (One of the first structures in the US to have a balustrauded cornice was the portico at George Washington’s Mount Vernon home.)

The Jersey City Public Library is located on the corner of Jersey Avenue and Montgomery Street, steps from the gorgeous Van Vorst Park, surrounded on all four sides by 19th-century brownstones and row houses. Some of these beautifully preserved structures have been home to prominent individuals including New Jersey governors and President Wilson’s Secretary of War Lindley Miller Garrison. The park and corresponding historic district are named for the Van Vorst family, whose ancestor Cornelius Van Vorst was a Dutch settler who arrived in the US in the early 17th century. Many architectural styles are represented in the Van Vorst historic district, described in this walking tour. 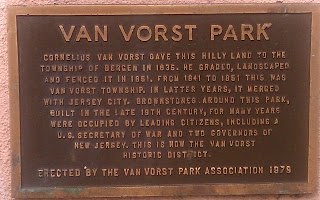